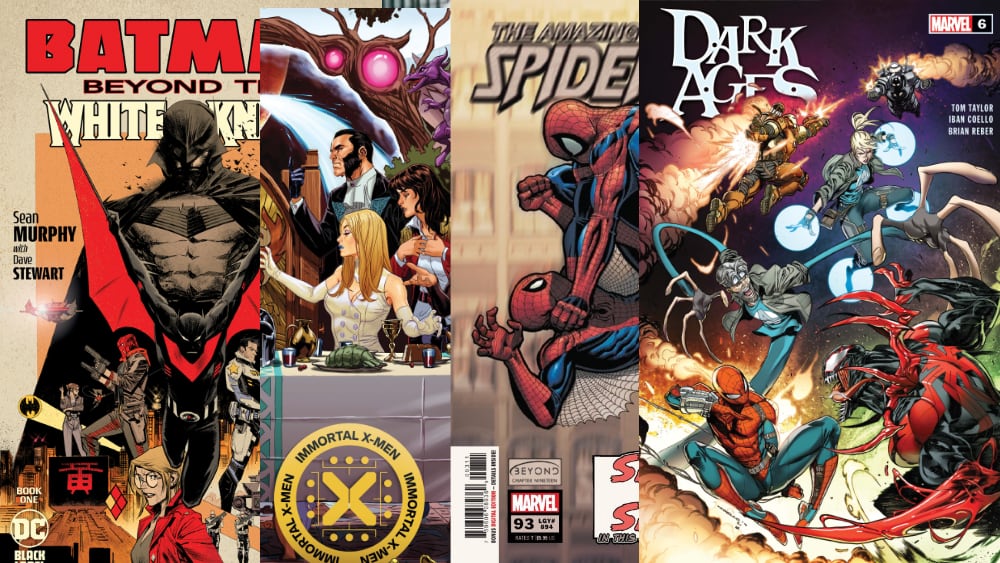 Here are the books you should check out in Four Minutes To: Four Comics Review!

Batman: Beyond the White Knight #1 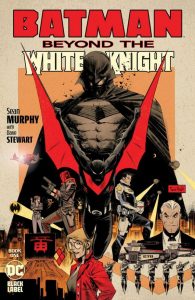 Writer and artist Sean Gordon Murphy has managed to create his own little corner of the DC universe with his White Knight line, and this time he is back once again with the first issue of Batman: Beyond the White Knight.

As the title of this comic suggests, Murphy is now adding the Batman: Beyond characters into his White Knight line and he does so by jumping ten years into the future, thus offering us a glimpse of what this universe is going to be like a few years down the line and that is certainly a very enticing concept.

It is no secret that Murphy has constantly tweaked the Batman mythology to his own preferences and has given them their own respective spin, which is something that he does in this issue once again by not only adding another history to the character of the new Batman, Terry McGinnis, but also by altering the history of one of the Robins of the main continuity, Jason Todd.

In this universe, Jason was the first Robin and while he was captured and tortured by the Joker like in the famous A Death in the Family event, there is a difference here: he wasn’t murdered. This alone plays a monumental difference in the way that things developed and while Murphy doesn’t show all the ramifications, it does play a role in our minds and it allows for a lot of different situations.

This comic does set up a lot of things and plays with a lot of the plots and beats of the original plot, which is quite exciting because it gives you a lot of different perspectives and perceptions of what happened at Gotham, especially if you have been reading the previous comics. It is quite fascinating from that perspective.

The art, as you can expect from Murphy, is wonderful. Detailed, minimalist and dynamic, there is a certain electricity in his artwork that fits extremely well with the story he is trying to tell. It’s dirtier, rougher and more intense than what we have seen in previous stories of his and here it fits like a glove.

Overall, a very exciting first issue that introduces us to a new reality of the White Knight line and a very different perspective for those of us that grew up with the Batman: Beyond animated series, so there is a lot to look forward to in that regard. After the long, elaborated era of Jonathan Hickman has been left behind, we are witnessing the beginning of a new creative tenure for the X-Men and this title, Immortal X-Men, is one of many that picks up in the aftermath of Hickman’s tenure and the many different lives Moira had to go through to reset the universe.

This comic focuses on the Quiet Council and their impact on Krakoa, especially on Mister Sinester. Writer Kieron Gillen wrote the X-Men almost a decade ago and he was mostly known by his work with that character, so it is interesting to see him tackling Sinister once again and using him as the lenses with which you see the events unfolding.

Lucas Werneck is mostly known for his artwork on Marauders, but he is a very capable illustrator and it shows on this issue as we see a wide array of panels that showcase his virtues. The vast majority of the comic looks wonderful, dynamic and even if there isn’t a lot of action in here, it plays very well to Kieron’s writing and that is the core goal of any self-respecting artist in comics, so I think he has done very well here.

In terms of the story itself, Gillen explores a lot the theme of power and the desire for it, which is of course one of the main topics of Hickman’s run and it feels like a natural progression of what we have seen in the last two or three years.

In that regard, the issue discusses how there is a vacuum of power in Krakoa after the events of Inferno and a lot of characters in the Quiet Council after their own set of reasons to crave said position and of course the power that comes with it, thus making it a very interesting and philosophical read in terms of what power is and what a person can do with it.

It is definitely a Gillen comic in the sense that there is a unique sense of humor and that adds another layer of complexity to the story because it feels like what Hickman has done, but with that singular touch that only Gillen can provide and it makes a very fascinating read from that perspective.

It is just the first issue and while there is much to come, it definitely has a lot of promise and we can tell that there are still lots of stories starring our favorite mutants. 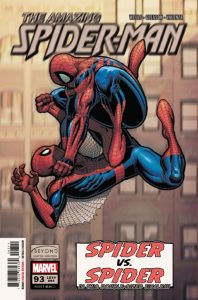 The Beyond Saga has been the running storyline in the Amazing Spider-Man comic for the last months and it has been building up to this comic, which is, fittingly enough, longer than the usual 22 pages, amounting to 40 pages.

The creative team of writer Zeb Wells and artist Patrick Gleason is the duo that kick started this storyline all the way back in issue #75, which highlights how long we have been going on with Ben Reilly’s struggles and the return of Peter Parker as Spider-Man after dealing with an intense coma.

The vast majority of the issue is a long battle between Peter and Ben after everything that has happened in previous issues. Considering the way that it is written and how much emphasis there is in this conflict, the main point of this battle is to be the main conclusion of the Beyond Saga and therefore the creative team threw everything they had to make this as exciting as possible.

Of course, this being a comic drawn by Patrick Gleason, naturally the art is going to take a lot of interest and attention, which is exactly the case here as we are talking about a comic that has a lot of phenomenal pages.

The action sequences are dynamic, exciting and the colors are also quite vibrant, making every single of the battle between the Spider-Men pop even more, which is quite important because if that wasn’t the case, it was going to be a very dull experience. But that is thankfully not the case.

In terms of the actual story, Wells does some interesting things with the character of Ben as he switches the latter’s motivations a little bit and while that may sound strange at first, it does have a positive impact in this issue and it may very well have a lasting, positive influence on future storylines involving his character.

The backup stories are also quite touching and it shows how Peter is dealing with everything that has happened to him recently, especially from a mental and physical perspective. It also shows him taking another huge step in his relationship with Mary Jane, making things a lot more rewarding for longtime Spider-Man fans that had been waiting for ages to see their relationship back in a stable position.

Overall, a very enjoyable conclusion to a very good storyline and the beginning of a new, exciting chapter in the Spider-Man legacy. 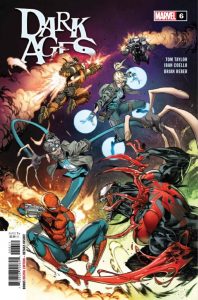 Tom Taylor was definitely trying to do something different with the concept behind Dark Ages. Here we have a writer aiming to turn upside down the “dark future” concept that we have seen so often in comics while adding a much more uplifting approach to things and in a way I have to say that he has succeeded, with this issue being one of the best so far because of many different reasons.

First and foremost, there is a lot going on in this issue and that has been a running theme with Dark Ages. After all, we are witnessing a post-apocalyptic version of the Marvel universe that has dealt with the loss of technology and the surviving superheroes are trying to find ways for a better future in the middle of this madness.

The issue actually starts with Miles Morales explaining how he met Venom and how the two of them end up merging with Carnage, which is a disturbing enough concept that is actually quite interesting. At the same time, we are also seeing how Spider-Man, Doom and other heroes have reached Paris where they have to face off against the villains.

The story is tense-filled, action-packed and you hardly ever have time to catch a breath, which is the way that these types of stories should go. Unlike the vast majority of stories of this ilk, though, there is room for hope and you see much more of a fighting spirit by the heroes, constantly trying to overcome the losses, the suffering and so on, especially when you consider the insurmountable that they are having to face.

The art by Iban Coello also deserves a lot of plaudits. It is exciting, detailed and every page is definitely worth your time as it manages to get your attention in many different ways. I love it when Marvel adds art of this caliber to this world class writing because it makes the whole experience of reading the comic a lot more enjoyable and that is something that is always important to take into account.

Overall, a very nice issue that keeps developing the story of one of the most exciting comics out there and one that manages to take old concepts and make them a lot fresher and fun, which is of course the whole point of comics as a whole.

Definitely one of the finest reads in the market right now.